Israel celebrating the opening of the United States Embassy in Jerusalem

About a year ago US President Donald Trump announced the recognition of Jerusalem as the capital of Israel and ordered the planning of the relocation of the US Embassy in Israel From Tel Aviv to Jerusalem. And on May, 2018, the US embassy was officially opened in Jerusalem.

On this special day the top management of the IDC company, the owners of the Moriah Collection, faith jewelry with the Jerusalem stone from the Temple Mount, took part in the important festive event at the Waldorf Astoria to mark the transfer of the US embassy together with Orthodox Union.

Hours before the official ceremony relocating the US embassy to Jerusalem, Jason Greenblatt, the US President Donald Trump’s Mideast peace negotiator, said that the move is a “necessary condition” to a lasting peace deal.

IDC company, the owners of the unique Moriah fine jewelry collection, are very proud to participate in this festive event hosted by the Orthodox Union in Jerusalem, as the main concept of the company is to represent Jerusalem’s strength, value and holiness. Mr.Avi Tavisal says: “I am a seventh-generation Jerusalemite, Zionist, and man of faith. I am very happy that we are on the way to find ever-lasting peace in Jerusalem”.

“Back to Jerusalem” artwork is inspired by the shape of the Jerusalem stone – carved from ancient Jerusalem – which serves as the bedrock for the diamonds and silver that are meticulously inlayed in the stone by hand. The motif selected of a handshake represents our yearning for peace and our willingness to reach out to whoever is truly seeking for peace.

We trully believe this is another step towards the fulfilment of the prophesy of Isaiah:

(Isaiah 27:13 ) “And in that day a great trumpet will sound. Those who were perishing in Assyria and those who were exiled in Egypt will come and worship the Lord on the holy mountain in Jerusalem”.

We want that “Back to Jerusalem” will serve as a symbol of strength and inspiration, as it reminds the Holy Land; the passion and hopes of Jews, Christians and Muslims around the world; and the hopeful name of its capital, Jerusalem – the City of Peace.

At this important event the top management from Moriah Collection was thrilled to meet incredible Miriam Peretz, who was recently awarded the Israel Prize in Lifetime Achievement for Strengthening the Jewish-Israeli spirit. 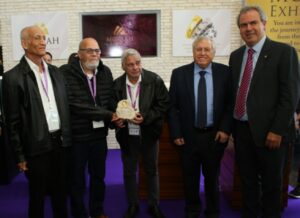